Here He Is: Larry Kaufman talks about his Jewish Journey 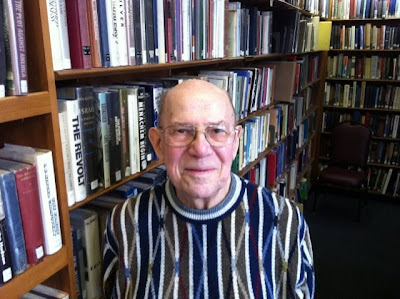 I first heard about Larry Kaufman in the summer of 2010 when we launched this blog.. We were thinking about congregants who might be game to respond. “Ask Larry Kaufman if he’d like to chime in,” I was urged. And when I did, and he did, I saw why.

Turns out, though Larry and his wife Barbara are relative newcomers to Beth Emet (they became members in 2007), Larry is no newcomer to thoughtful close scrutiny and response to a myriad of threads of Jewish text and thinking.

Sure, his degree in English literature from the University of Chicago and a career as a marketing and communications consultant are partial explanations for his engaging blog reflections on aspects of Torah and Jewish life. But the engine in his voluminous writings is his Jewish journey.

After growing up in an observant Jewish household in Cleveland (more on that later), and moving to Chicago, Larry tells about receiving a letter from his mother alerting him to expect a call from a man named Sidney Berkowitz. Berkowitz was moving from Cleveland to Chicago to become the executive director of the Jewish Family and Community Service. His mother knew Sidney through serving on the family service board in Cleveland.

Berkowitz called and invited Larry to Fred Harvey’s in the LaSalle Street Station. It turned out to be a hugely important day in Larry’s life because, in the course of lunch, Berkowitz asked him, knowing of his parents’ activism, “What do you do in the Jewish community?”

To which Larry replied, “Nothing.”

Berkowitz looked at Larry with surprise and said, “Why not?”

“Nobody ever asked me.”

“Where is it written that you have to wait to be asked?”

That afternoon, Larry called the Jewish Federation and got involved in the Young People’s Division.

He views that lunch with Sidney Berkowitz as life-changing, as was an exchange with his boss at the temple where he taught Hebrew as a high school senior, who prodded him to choose a college that offered active Jewish life on campus. Larry recently wrote about the bit players who change our lives on the Reform Judaism blog.

Larry’s call to the Jewish Federation led him full blast into Jewish organizational activity, including presidencies at the Young People’s Division and Schwab Rehabilitation Hospital, and vice-presidencies at what is now Spertus Institute and America-Israel Chamber of Commerce.

However, he was not part of the synagogue world until he married Barbara in 1974 and became involved first at Temple Sholom, and in 1978, in the Reform Zionist movement. Rabbi Polish and others had just started the Association of Reform Zionists of America (ARZA) and Larry was an early recruit, eventually becoming Chicago regional president and a “lifer” on the ARZA national board (ARZA’s mission, for those who don’t know, is to connect Reform Jews to Israel and to the establishment there of religious pluralism.)

Larry says he tuned in to the idea of religious pluralism because it was exemplified in the household where he grew up. His grandmother was Orthodox, so their home was kosher and “reasonably shomer Shabbat.” His mother, Rose’s, primary expression of being Jewish was in Zionism. As a young matron, she was recruited into an organization called Pioneer Women by Goldie Meyerson, (later known as Golda Meir). Rose eventually became national president of Pioneer Women (now known as Naamat U.S.A.), and spent the last ten years of her life in Tel Aviv. And his father, Louis, was active in the local Jewish community – the Anti-Defamation League, B’nai Brith, Jewish Big Brothers, and the synagogue Men’s Club.

Witnessing the differing ways that his grandmother and each of his parents acted on their Judaism, while giving respect and support to one another’s choices, instilled in Larry the idea that there are many legitimate and valid ways to be “a good Jew.”

So what has kept him deep in Jewish organizational life and learning?

Not surprisingly, he had more than one answer:

“It’s been an opportunity for personal growth, particularly in leadership positions. I have been free to push boundaries and take the kind of risks that I might not have been comfortable taking in business. ”

Since 1979, Larry’s primary organizational focus has been in the Reform movement, locally, nationally, and internationally. He currently serves on the Boards of the Union for Reform Judaism and of ARZA, and is on the North American Council of the World Union for Progressive Judaism

Through ARZA, he became involved in the American Zionist Movement, serving as chair of its Chicago board, as a national vice-president, and as a delegate in 2010 to the World Zionist Congress in Jerusalem.

While a student at the University of Chicago, he also attended the College of Jewish Studies (now Spertus Institute), and taught for more than a decade in the adult Jewish education program at Temple Sholom, including courses on the history of Reform Judaism and Comparative Judaisms. At Beth Emet, he is currently leading a class in Pirke Avot.

Larry is a regular attendee of Rabbi Knobel’s Talmud and Rabbi London’s’ Torah classes and Kahal. He is also a well-known voice in the Jewish blogosphere, where he regularly writes for www.rj.org . His web name is hinneni@aol.com. Hinneni means here I am. And we are glad that he is here indeed. Posted by Ellen Blum Barish at 8:32 AM 5 comments:

A Short of History of Hava Nagila

Nine-minute history of "Hava Nagila." Sure to bring a smile to your face, at least once.
Enjoy.
Posted by Ellen Blum Barish at 5:35 PM 2 comments: