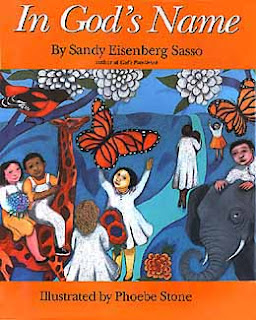 In her wonderful children’s book, “In God’s Name,” Sandy Eisenberg Sasso writes that after every living thing was named by God, all of the people said, “God must have a single name that is greater and more wonderful than all other names.” The farmer called God Source of Life. The man who tended sheep called God, Shepherd. The soldier, Maker of Peace. The caregiver, Healer. The slave, Redeemer. And on it goes. (There were 10 names, all together.)

When they all called out their own name for God at the same time, Sasso writes, “The people knew that all the names for God were good, and no name was better than another.” Then they came together and called God, One.

It’s a beautiful book, illustrated by Phoebe Stone (see book cover image at the left), that prompts one to ask “What are the qualities of God that resonate most for me?”

An essential part of the Selichot service is the repeated recitation of the "Thirteen Attributes of God," a list of God’s characteristics revealed to Moses after the Golden Calf Incident.

Adonai, Adonai (1,2), God (3), merciful (4) and gracious (5), long-suffering (6), and abundant in goodness (7) and truth (8); keeping mercy unto the thousandth generation (9), forgiving iniquity (10) and transgression (11) and sin (12); and that will by no means clear (cleanse, 13) the guilty; visiting the iniquity of the parents upon the children, and upon the children's children, unto the third and unto the fourth generation.

Prompt #1: Some of the words in the Exodus passage will move you more than others. Which ones do? Which ones don’t and why?

Prompt #2: Is there a logical sequence to these words? Why is Adonai repeated? And why are ten of these words qualities?

Laurence Kaufman had this to say --

I have difficulty with the concept of a merciful God, when we see so much evidence to the contrary. On the other hand, we see a lot of forgiving iniquity -- over and over, good things happening to bad people.

But if we look at the idea of b'tselem elohim, the image of God, we can read almost all of these as qualities we are supposed to mirror. In that context, this begins to make sense.

As to the repetition of Adonai, there are rabbinic theories that each time it represents different attributes (necessary to get to 13?), as well as a plausible theory of a Masoretic punctuation issue. But looking at the text as a pragmatist, I'd theorize that the author recognized that you sometimes have to holler twice to get somebody's attention.