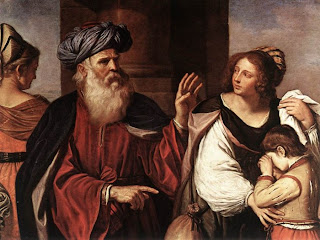 “Drive out this slave woman with her son for the son of that slave woman shall not inherit with my son, with Isaac!”

That slave woman is Hagar, Sarah’s handmaiden. You may remember that Hagar became pregnant with Abraham’s son, Ishmael, well before Sarah delivered Isaac after years (and years and years) of infertility.

Sarah insists that Abraham send Hagar and Ishmael away. The exact words, from my Stone Edition are that Sarah witnessed “the son of Hagar, the Egyptian, mocking.” But the text suggests that Sarah believes that Ishmael is corrupt and evil, a menace to the health and life of Isaac. Surely there are issues between the women – jealousy and resentment perhaps? But banishment? Of Abraham’s blood son?

Though the matter distresses Abraham, God assures him that a great nation will be made of Ishmael. And so Abraham abides.

Ultimately Ishmael is spared – because God hears Hagar’s cries (or is it Ishmael’s) and a water well appears, but the whole drama begins because Ishmael is an Egyptian and he mocked. Ishmael didn’t kill anyone. There was no blood. How different is “He’s an Egyptian” to “He’s an American” or “He’s an Israeli?” But exile? Deportation by demographics?

The Koran holds Ishmael in high regard because his descendants include Muhammad, the Patriarch of Islam. He is considered a prophet. We know he became an archer and married an Egyptian woman, but what do we (Jews) really know about the rest of his life? We understand Ishmael as menacing and then his storyline ends for us. I recently learned from a Muslim friend of mine that Hagar and Ishmael eventually settled in what we know of as Mecca. The seeds of Islam begin with the casting out of Hagar and Ishmael. God clearly had other plans for Ishmael. Muslims view the Abraham-Sarah-Hagar-Ishmael-Isaac story as full of blessings.

My sensitivity to certain sections of Torah is most likely the result of my interfaith activity over the past eight years. Among the many attractions for me at Beth Emet, has been our rabbis involvement Things Interfaith. It’s touchy, complicated stuff. But I like that all of them have given it a go. I’m proud that Beth Emet continues to be one of three host houses of worship for numerous interfaith events each year – one of which is taking place this Sunday, October 24th. At 2 pm in the Weiner Room, Muslim, Christian and Jewish women will reflect on the food of our faiths in an afternoon retreat titled, “Shared Food for the Faithful: Passover/Sukkot, Eucharist and Iftar.” (Sorry fellas, this is for women only.)

Last year we met at Beth Emet, a Morton Grove mosque and a Chicago church – to talk about women of courage, personal healing and the sacred arts. After Sunday’s event, during the next year we’ll look into how our faith impacts our work. and later, how our traditions view end-of-life passages.

In these gatherings, I hear what makes us similar and different. It may sound odd but I am pushed deeper into my Judaism, I think because these conversations ask me to articulate what I may have never put into words before.

I’d be curious to hear what this stirs in you.

When we discussed this parasha at Kahal, our darshanit Judy Gravdal talked of the many ways of looking at it, including as the script for a cinematic blockbuster. Given the complexity of the characters, I suggested that one way to get a grip on them would be to cast the film. (Admittedly, I relate to movie stars of a different generation, so I see Abraham as Jimmy Stewart and Sarah as Joan Crawford, whereas others might choose George Clooney and Julia Roberts.)

Neither Abe nor Sarah comes off particularly well in this story, and while God may be the good guy here, He loses those good guy creds later in conceiving the cruel test of the binding of Isaac.

You talk of reading Torah differently than once you did, and maybe this proposed casting of the film is still another way to get into the characters, and thus another way to understand Torah.

A wonderful example of another way "in" to Torah study - by way of deep character study in the fine acting tradition. Aren't actors always talking about the character's "motivation" and what they could relate to - or not - in that character when they took that character on? What great insights might be uncovered!