Out of the Mouths of (Beth Emet) Babes 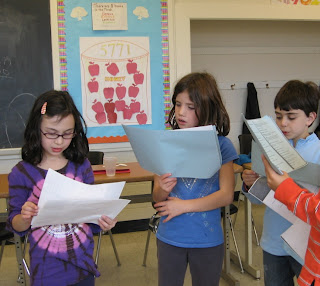 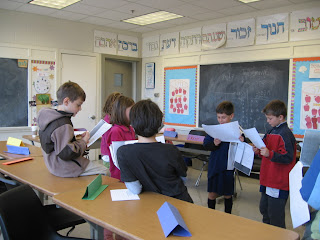 Last Sunday, I substituted for Janet Reed’s third grade religious classes at Beth Emet. With two fabulous assistants, (thank you, Aaron and Tess) and play scripts for as a lesson plan (thank you, Janet ), we were all in for a treat.

The play focused on the Jacob and Esau story. Jacob is sent to Haran when he learns that his brother Esau is en route with 400 men. There, Jacob sleeps with his head on a rock in the desert, wrestles with an Angel and has the vision of The Ladder. When the brothers meet, after years of hatred between then, instead of bloodshed, there is … a hug. I believe it’s the only hug mentioned in Torah. (Can someone let me know if there is another?)

We split students into two groups for rehearsals (see accompanying photos), and when they returned to the classroom, we talked about the story.

Ever tussle with a sibling? I asked, pulling from Janet’s lesson plan. All but one said yes (I think he was hiding something!) Homefront fight scenarios were offered: disagreements over when a toy was purchased or who had charge of the television clicker. We talked about how these disagreements could be resolved. One student said that when one sibling wins an argument, he or she should at least say that the other that he or he was entitled to his or her opinion.

“What else could a brother and sister do if they were steaming mad at one another?” I asked, trying to steer them back to the Jacob and Esau story. “What did Jacob and Esau do?”

Another student said, “Jacob had that night in Haran before he saw Esau.”

“Good,” I said. “How did that help the brothers reconnect?”

“Jacob had time to think,” said yet another student.

Only a minute was left before the end-of-day bell.

That’s when another sharp Beth Emet kid said, “There’s a girl in my school who is always saying mean things to some of us. Then some of us say means things back. Next time we get into it, I’m going to suggest that take a break from the fight. Maybe that will help.”

Beth Emet kids are so smart.