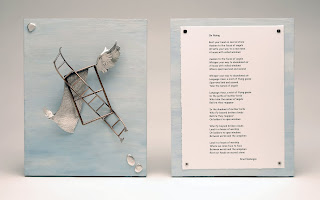 Fabulous- Thank you so much for this posting, highlighting these moving works.

While applauding the eloquent verbal message, the visual art that emerged, and the affection that inspired both, I have to take a moment (as did Dina) to comment on the verse form. I had not been familiar with the pantoum before, and I am blown away by the skill needed to make one happen. A true tour de force!

As always, I am astounded by the talent abounding within our Beth Emet community. From artists, to poets, to scholars and more, I am blessed to be surrounded by these people as I continue my Jewish journey each day.