Celebrating MLK, Interfaith Writings and a Flash Mob in Jerusalem

If you were at Beth Emet on Friday, January 13 for the Martin Luther King Shabbas dinner and conversation, you know that you were at a history-celebrating and history-making event. But if you couldn't be there, you can get a small taste of that night from text and links below.


I had the pleasure of contributing a personal story connecting King, to my father, to the civil rights movement, to the North Shore, and back to Beth Emet. Here is the text of that piece and the link to the radio interview that followed on Monday, January 16.  EBB

In 1958, 29-year-old Martin Luther King, Jr was a guest speaker at Beth Emet synagogue in Evanston. Admission was $1.75. The program says King was considered “one of the outstanding Negro leaders in the country.”
Five years later, in 1963, King delivered his “I Have a Dream” speech at the March on Washington, rhetoric that set the tone for the civil rights movement and ultimately earned him a Nobel Peace Prize.
…. A hundred years after the Emancipation Proclamation and the Negro is still not free.. 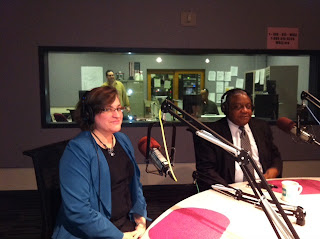 Rabbi Andrea London and Reverend Mark Dennis at the WBEZ Studios
That same year, my parents moved to Glencoe. In nearby Deerfield, town leaders were threatening to keep an integrated apartment building from being built by turning the area into a park. Eminent domain, they said. My father, a white, Jewish businessman, had been moved by King’s mission to end racial segregation and discrimination. So he went to the rally in that park to protest and brought me along. I was almost four.
What happened there has stayed with me since: I can still see the huge crowd forming a large circle. I can still feel my father’s hand in mine and see the smile from a tall, black man as he took my other hand. And I will always hear that chorus of men’s, women’s and children’s voices singing “We shall overcome, we shall overcome, we shall overcome, someday…”
….We need to lift our nation from the quicksand of racial injustice…
Later that year, my dad, who at 29 had become active in the Congress of Racial Equality (CORE) was arrested at a demonstration at the Chicago Board of Education office. CORE was demanding the resignation of the superintendent who was authorizing the building of new schools in white neighborhoods but not black ones. My father and 36 others were arrested and jailed at this nonviolent sit-in. A photograph of my father being dragged off by police made the cover of the Chicago Daily News.
Race relations in the 1960s was less about talk and more about demonstrations…. rallies … sit-ins … jail time or violence. The worst of course was in 1968, when Martin Luther King was shot on the second floor balcony of a Memphis motel.
A few years ago, a recording of King’s synagogue speech was found in a congregant’s basement. Beth Emet’s Rabbi Andrea London asked Second Baptist Pastor Mark Dennis to co-host a Friday evening sabbath service on Martin Luther King’s birthday. Evanston Jews and Baptists prayed and sang together. Portions of King’s 1958 speech were played, followed by dinner and a table discussion between the congregations about the challenges and next steps for race relations in the community.
Today, Martin Luther King would have turned 83 years old.
Would he be disappointed that we are still talking about race relations? Or would he be pleased at how different it looks?
“I have a dream that the sons of former slaves and the sons of former slave owners will sit down at the table of brotherhood. I have a dream.”
I have no way of knowing if the sons and daughters of former slaves and slave owners were in that room last Friday evening, but I do know that some fifty years after King first spoke about racial equality in this same community, his dream for blacks and whites to sit down at the table of brotherhood became a reality.
Ellen Blum Barish


Several Beth Emet women - Marilyn Price, Betsy Fuchs and myself -  are featured in the launch of an online interfaith publication titled Creative Space, produced by the women of SoulSpace, a women's interfaith circle that celebrated 10 years in 2011.


"We invite you to enter Creative Space and share the spiritual writing and images of our Jewish, Christian and Muslim contributors. The seeking spirit of women of faith is at work in our inaugural posting of Creative Space.  On the way to a wedding, in sacred spaces, through home ritual, women pray and make meaning of life’s gifts and challenges.  In the stillness of the woods and in the coolness of a swimming pool, they listen more deeply.  To earthquake shattered Pakistan and the holy places of Israel, they journey to form relationships in faith.  Waiting on the tarmac or sitting near a hospital bed or stirring a cup of coffee, women form images and expressions of souls searching the many manifestations of Adonai, God, Allah.


Here's the link to read more:

And finally, because my daughter is en route back to college today from her first trip to Israel, I couldn't resist posting a link to this
wonderful Youtube video: a flash mob in Jerusalem.
Enjoy.